How to Make A Documentary 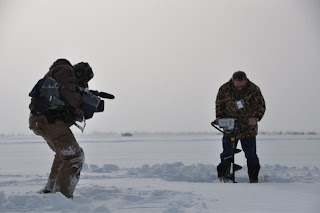 (Director of Photography Tony Hardmon on location in Parshall, ND)

Many people have asked me how to make a documentary and really there’s no simple answer. I think at the outset though, the key is to find a good story that inspires you enough to push it to the next level, and the next. The story of my friend Rachel Libert’s latest documentary series, Boomtown, which airs tonight on Discovery’s Planet Green Channel, is really a great example of how you can stumble upon a story, investigate, and find a route into the heart of a great tale.

Rachel first read about the town of Parshall, North Dakota in 2008 while reading an AP story on Yahoo news. She found the idea of a tiny, remote town suddenly striking oil fascinating and called the local public officials, thinking it likely that some other film outfit would have already been filming. “Amazingly, nobody else had contacted them,” she said. A week later, she and her DP husband, Tony Hardmon, were there and started filming for the next few days. Within a couple of months they had cut together a short trailer and began to shop it around to broadcasters.

“We basically looked at what programming was out there,” she said, to see which network offerings were closest to their content and approach. Since it a documentary, and not a narrator-driven non-fiction series, “the list became pretty short,” she said. But nine months after they cut the trailer they had a deal with Planet Green to produce the five-part docu-series.

For any filmmaker or producer who has tried their hand at development and pitches, nine months is actually pretty quick. The reason for this says Rachel, was the timing. “Time was of the essence,” she said, as the story was unfolding too quickly and key events would have passed if they’d been forced to wait. That's a big risk that filmmakers make all the time but luckily it paid off when the project fell into the visionary programming hands of Laura Michalchyshyn.

For the entire next year, Rachel and her crew filmed the ups and downs among the people in a tiny town suddenly made rich by oil. She loved the people there and was drawn to how their personal stories were connecting to the mega shift in their world. It was this intimate personal perspective that allowed her to tell the story of Parshall. “My approach is not to think about what I want to say,” she explains, “but to listen to the story unfolding in front of you and to be patient.” As a storyteller, there are things you hope will happen, she continues, but life doesn’t always happen that way. No, it doesn’t.

The irony here is that sometimes in order to tell the most human and honest stories, you really have to let them tell themselves. And that, quite simply, is a splendid way to make a documentary.

Posted by Leigh Devine at 8:43 PM No comments:

The Potential of Video

I never cease to be surprised by the many ways video can be used to teach and inspire. If a picture (1 frame) says a thousand words, then video (30 frames per sec) says it exponentially. Speaking of math terms, that's a language Vi Hart, the YouTube "mathmartist" is revamping in her personal and increasingly viral view of where life and math intersect. She's created an entirely new way of appreciating shapes, concepts, and numbers and hinging them to everyday things. This one on snow angels is a good example. Brrrrrr...

Sure, the video could use some improved production value, and graphics always help, but she's finding her voice and with that hopefully a new way to bring math into daily conversation. I, for one, don't think this way, but if I could borrow some of these insights, I might be able to help my own daughter appreciate how math is everywhere in life and not fear it as an evil alien topic through which she's doomed to slog (like I was and did).

The video revolution is what allows this innovation to happen. Chris Anderson, best known these days as the Ted Talks guy, calls this "crowd accelerated innovation" and discusses the influential power behind how video communicates the subtleties of human thinking and action. Role models can be anywhere and anyone. Thanks Vi Hart. You are changing the world with video.
Posted by Leigh Devine at 10:41 AM No comments:

Leigh Devine
I'm a journalist, author and video director who loves technology as it relates to communicating and storytelling. I'm always looking for cool and innovative ideas that make me and others question our perceptions and beliefs. Call it curiosity. :)